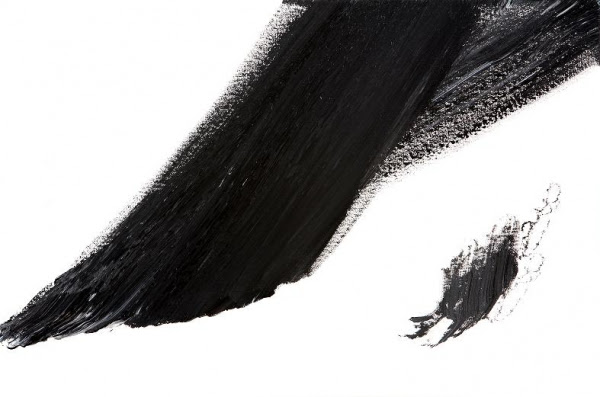 
Manhee Kim’s gestural abstraction is not doctrinaire in the sense of 20th Century work but rather is attuned to his time yet is not based on any particular manifesto.
In this new abstraction, there is a purposeful movement that is almost aggressive yet controlled, that subverts claims of perfection. It is about incompletion, gestural antithesis, and a tendency towards an unfinished quality analogous to the Japanese idea of Wabi-Sabi, the appreciation of imperfection. In Korean it is almost synonymous to the concept of Han that is like the mystery of the soul or a feeling of angst and yearning that developed over hundreds of years of shared cultural development.

In Kim’s work like the White on Black, these qualities appear in his flying white brushstrokes that contain as much void space as solid. This subversion of closure allows Kim to address issues in his own roots while being currently viable in denying dogmatic history. But, even in this departure, Kim is not being cavalier, but rather playfully unpredictable and informal.

Kim’s approach to his work is very serious however, although there is an intuitive element present. Kim works with different size scales without confining his smaller works to the genre of studies, but rather giving them their due democratically speaking. Kim’s works are not meant to produce calm resolution but rather agitation and excitement addressing the multivalent and tumultuous world in which we reside.